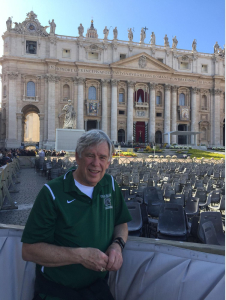 How or when did you discern you wanted to enter the priesthood?

I first thought about becoming a priest in the 5th Grade when a Maryknoll Father came for a vocation talk. I tried the life of the Christian Brothers, but by the time I was a sophomore at St. Mary's College I knew that the priesthood was my vocation. That is when I transferred from the Christian Brothers to the Dominicans.

How did you come to be back at QAS and as a priest? What other parishes/communities did you or do you serve?

I came QAS for a Funeral Mass and that is when I met Fr. Neal. I told him that QAS was my parish home. I was born in Concord Community Hospital, baptized in the old QAS, went to QAS School where I made 1st Communion and was confirmed. I said that if he ever needed help with Confessions and Mass I would like to help. Well, the rest is history! As a priest I have served parishes in Seattle, Anchorage, Everett, WA, San Francisco, Antioch, Los Angeles, and Benicia. I am still the director of Saint Dominic's Cemetery in Benicia.

You are also a graduate of De La Salle yes? Is there a correlation between your name La Salle and the school?

Yes, I went to DLS and was in the first class to graduate. I love the Brothers and what they did for me. I understand and appreciate the life and spirituality of St. John Baptist De La Salle. Thus when I was asked what religious name that I would like as a Dominican, I told my novice master that I wanted to be LaSalle!

What was school like when you were a student at QAS? What do you remember most?

I remember that even though we were a very large school in a small playground we seemed to get along and make it work. I remember very fondly Thursday Hot Dog lunches. I remember the choir that Sr. John Elizabeth had. I remember praying the rosary in the church when President Kennedy was assassinated and standing in silence on the steps of the church while bells tolled after his death was announced. I remember the duck and cover earthquake drills and the air raid walking home drills. I remember someone shooting a spit wad at Sr. John Elizabeth that landed on the white "bib" that the Sisters wore. When nobody would admit to shooting it, the whole row (including me!) had to stay in the classroom during 10 AM recess and diagram 14 sentences. I remember ransoming Pagan Babies for $5.00 each. This was a way to raise mission awareness and get money to support missionaries overseas.

We are asking our alumni to share with us, how QAS shaped their future or helped them to become who they are today. What is one or two things QAS gave you that stays with you today?

QAS gave and still gives me a sense of belonging, of being home. That is essential.